The division of 1993 has also been presented in two cartographical publications:

Detailed theoretical and methodical basis of the regionalization is presented in the first publication. It should be pointed out that general maps of potential natural vegetation were the most important source of knowledge on the diversity of geographical space and they were used to determine regions' division at a basic level. However, the classification of higher units was based on various criteria resulted from landscape, syntaxonomical and biogeographical characteristics.

Geobotanical regionalization has a character of a hierarchic division and it includes the following classes of regions marking with specific codes:

In the presented regionalization, the territory of Poland is divided into:

Remarks on the study form

Geobotanical regional division of Poland is presented on 15 detailed charts, together with names of the most important towns and the ATPOL square grid. There are also printed codes of the basic regional units - landscape subregions. Additionally, to facilitate using of the detailed charts, there are presented 2 general charts with the division of syntaxonomical subregions and higher units, as well as the division of the map sheets and with the ATPOL square grid.

The hierarchic regional division is presented in the table. It contains: codes, names of regions (in Polish and partly in English) and data on the regions' size. 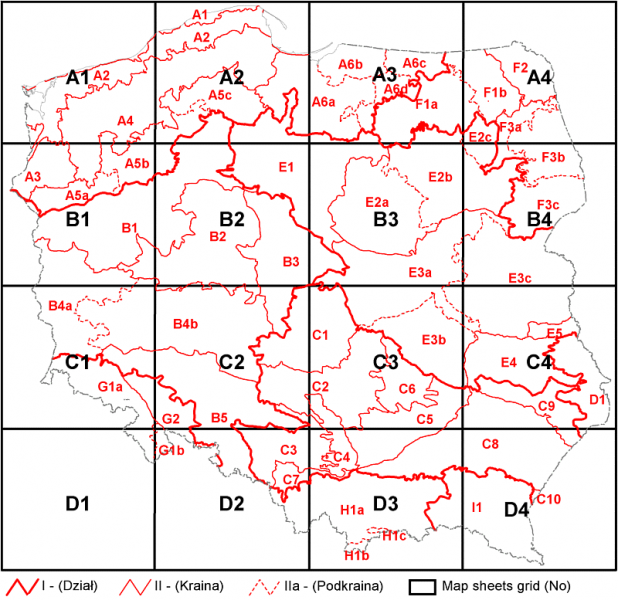 The map is protected by copyright of Jan Marek Matuszkiewicz. The reproduction and distribution of the map as a whole or in parts is only possible with the author's written consent. Without this permission, it is only allowed to copy single sheets of the map for scientific or educational purposes with the right quotation.