Department of Environmental Resources and Geohazards

The station is located in the west of the Płock Basin on the left bank of the Włocławek reservoir. In physico-geographical respect, that basin is the southernmost mezoregion of the Toruń-Eberswald old valley. The Płock Basin is an asymmetrical extension (12-18km) of the Vistula River valley, extending between Płock and Włocławek. From the north and south, it is surrounded by young glacial moraine of Dobrzyn and Kujawy uplands. Northern right-bank side of the valley that is undercut by the Vistula River begins with a sharp bend of the moraine upland. It is circa 50m in height, being at between 10 and 50° angle of slope inclination. In the slope, there occurs a profile of Neogene and Quaternary sediments. The Miocene is represented by markedly disrupted a brown coal formation,  and the Pliocene  - by variegated Poznań clays. The Quaternary sediments are made up of two levels of  boulder clays separated by sandy-gravel series. 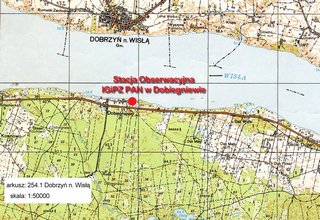 Complicated geological structure, hydro-geological conditions, lateral erosion of river before dam construction and abrasion after construction of the Włocławek reservoir, all these factors played a decisive role in the intensive process of surface mass movements (downfalls, landslides or landslips). It is the largest compact landslide area that can be found in the Polish Lowland. To the southward the valley bottom raises gradually in the system of fluvial and fluvio-glacial terraces. Surface terraces, in particular in the centre of the old valley, are diversified by various types of dune forms. In that part of the old valley where dune-forming processes are most markedly visible, the denivelations exceed 30m. An essential element of the relief of the valley bottom constitute two paths of subglacial channels. Despite the fact that their course is, to a larger extent, masked by later formed dunes, after ultimate melting of dead ice blocks in the channel depressions lakes were formed. Because of their number (63 lakes), S. Lencewicz named that area the Gostynin Lakeland.

Due to highly permeable sandy-gravel rock material there is a poorly developed hydrographic network. Surface run-off is shaped by the two river systems. These are composed of several kilometers long rills that drain the dune area and the left bank Skrwa and Rakutówka rivers, of which the source region is located outside the bottom of the valley. In the Płock Basin, there prevails podzolic and rusty earth type soils. Smaller areas are covered by brown soils and as well as peaty and muck soils. Owing to poor soils and disadvantageous hydrological conditions, large areas are covered by  forests(62%). Forest fresh sites constitute dominant type of forest, diversified by stretches of dry, moist and mixed forest, as well as by dry ground, riparian and ash-alder swamp forests.

The Włocławek reservoir formed in 1970 is a largest dam-reservoir in terms of surface area (70.2 square kilometers) and the second one in regard to cubic capacity (376 million of cubic meters). The length of this body of water  is 57km and its width ranges between 500 and 2500m. It includes the former river bed along with low terrace levels. Average depth reaches up to 5.5m, and maximum one is 13m. Annual fluctuations in the natural flows of surface water do not exceed 1m. The reservoir is characterized by high-flow volume. Theoretically, the time of  water exchange amounts to 4.5 days. Its low level of capacity, namely 13.5%, limits its retention function. Morphological characteristics of reservoir bowl and the short time of water exchange influence the polymictic character of water masses mixing.